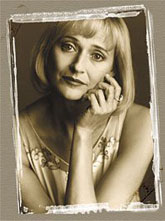 CD NOTES ON SLEEVE
The journey has taken me through many countries of the heart. I have stopped and explored endless territories on the road with my ever- constant travelling companion - love.
Each stop offering me a new experience - the joy of finding love, the sorrow of losing it and the pain of not having it returned.
The songs on this album are for all of you lovers in the world who have travelled on the same roads, I hope when you listen to my songs, you will find comfort in the knowledge that you are not alone - the paths of life are well worn by many other wandering hearts.
I would like to to dedicate this, my first compiliation of original songs, to my beloved late husband, Peter - my fellow explorer with whom I shared an 18 year voyage of discovery and a special thank you to my everloving sister Eugenie, for her constant inspiration and support
I would like to thank my true friend and producer Rael Birns for believing in me and my songs - without him this album would never have been.
To my gifted and talented musicians, Andy, Anthon, Barry, Billy, Ianin Julian and Nippy, and our sound engineer Evert. Thanks you for your great contribution, you so perfectly helped in creating the sound that was born in my bosom and now dances at my feet.

Peter Feldman, top music critic writes
“ A Star Shines at Carnival City.  Last night André Hattingh came out of shadows to show the world her true writing talent. She held them spellbound with a repertoire of  truly elegant music. Her vocal power at times stuns as she effortlessly reaches for those high notes.  Go and get enchanted”

Garalt Macliam –STAR
This is an up-close and personal view of the singer-actress as a person. It is as if she is sharing her hopes, her dreams her successes and her losses with her audience. One moment you can see her vulnerablity exposed and hurting the next she will vamp the pants off her audience. That’s life and as the sexily ingenuous Hattingh lives it, it seems a lot of fun

Christina Kennedy - CITIZEN
“Her personable nature shines through, Hattingh received a standing ovation on opening night, after returning for an encore.  The audience loved it, and my guess  is that all you soppy lovers out there will too.

Monika du Plessis  SUNDAY INDEPENDENT
“Heads nodded, shoulders jiggled, torsos bounced and I have no doubt feet tapped. Many were the instances when I saw couples exchange meaningful glances or touch each other as something hit home and personal meaning came to life. Her voice is powerful, her style is friendly and inviting at times demure,at times challenging, naughty and raunchy and she allowed her passion to come through.”

Check out this album on iTunes:

"When you throw the pebble of a dream Into a deep blue mountain stream. You can never count the circles left behind" From "Live For Now" by André Hattingh.

"I remember sitting on my bed thinking how fortunate I was -- how God had blessed me greatly and how wonderful my life was. I wondered what I could do to help make the world a better place. No sooner had the thought come into my mind when I wrote the song "Change Your World". Little did I realise that the words of this song were going to be a great help to me when, not long afterwards, I was diagnosed with colon cancer. During my recovery I wrote many more songs which gave me strength and helped me heal. My dream is that this music will help many others."

"If our planet and the human race are to survive, our world has to change. To achieve this, we need to start changing our world within. We have to realise that "we are all one". All of humanity and all of nature is one. No one is better or more important than the other. And awareness of these great truths, combined with the power of love and positive thought, is how we can begin to make the change."

ANDRÉ HATTINGH IS THE SOLE DISTRIBUTOR OF THIS CD. TO PURCHASE A COPY

All music and lyrics composed by André Hattingh

Neale Donald Walsch for writing the books that inspired many of the songs.
Mike Slavin whose musical genius was a great contribution
Jenny Hattingh, Eliza Clark, Lucy Solomon and Peter Elstob for backing vocals
Mike Pawley for his photography and Andrew and Leslie van der Linde from
VDB creativ for the cover design


Check out this album on iTunes: