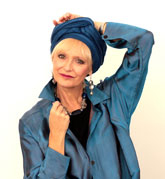 At the age of 13 André was touring South Africa on a professional basis with her sister and the well-known group “Groep Twee”. She continued to shine as a solo artist at school. She was the first pupil at Epworth to represent the Province in singing and performed as a soloist for the Natal Schools Choir. At 20 she completed a degree at Natal University majoring in Speech and Drama.

On arrival in Johannesburg. André auditioned for a part in a musical and immediately won the lead role as Catherine in “Pippin”. As the result of her overnight success she became one of South Africa’s favourite musical comedy performers going on to star in many musicals including ”Cinderella"  “Vanities” "Starting Here Starting Now" "Tomfoolery" “Little Shop of Horrors” "Side by Side by Sondheim" " Noel and Gertie"

André played in several TV dramas and feature films including "Charlie Word 'n Ster" in which she sang and composed the theme song "Saam met Jou".

Apart from her stage and film performances André became a household name hosting SABC  TV’s first children show “Bangalory Time” for some years and during this period honed her song-writing skills, being required to write and perform a new song live on air each week. In addition to this André went on to host her own TV comedy series “The André Hattingh Show”.

Having worked with international directors, André was then invited to New York, where she performed. She returned to South Africa to play the lead in “Little Shop of Horrors”. after which she appeared in many more productions. In 2000 she co-wrote, directed, produced and starred in a show called “Two Tickets to Broadway”.

In 1987 André diversified her talents and has since established herself as one of South Africa’s leading lights in ethnic fashion design, even bringing out a collection for the opening of the “Lost City” In l999 André was invited to Paris to show her Images of Africa Collection with tremendously successful results. Her customers include many famous people in Showbiz and business.  Her unique  unstructured garments in hand-made natural fabrics are worn by clients around the world. Her business was run from an exclusive studio in Parktown North.

During 2001 André stepped back into music. Experiencing a life of rich and sometimes painful experiences, her song writing  matured, culminating in a collection of songs based on her “Journey of Love” She wrote a show around this CD and performed this to great critical acclaim at 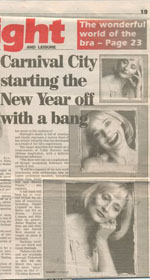 Carnival City for the whole month of February 2002.

She  appeared as a guest on “People of the South” as a tribute to her  contribution to the entertainment and fashion world.
A few years  ago she was inspired to write a song “Let Me Grow In Peace” It was chosen as the anthem for Childrens Day in Gauteng and performed to an audience of 40,000.
Many choirs throughout the country  included it in their repertoire.

André developed an inspirational talk in 2006 called “Colours of my Life” She has been addressing schools, womens  clubs and raising money for charities all over the country. A few years ago  she had  an operation to remove cancer and had 6 months of chemotherapy.  She has completely recovered.

This journey has inspired her to write many more  songs which she performs in her talk.  Due to the public demand she has  recorded a CD called “Change Your World” which was launched in PMB on the 9th August. 2008

In 2012 André decided to close her studio after 25 years. She felt a very strong desire to return to her great love of performing and writing songs full time.
In 2014 she  devised a show called “Forever Young”. André and her sister Jenny picked up the guitars again after almost 50 years and are performing all around the country. They are singing songs from the wonderful period of the 60s and 70s. They perform for theatres, churches, charities, and retirement villages .

André is married to the internationally acclaimed playwright and director Anthony Akerman. They live very happily in Greenside, Johannesburg with Themba their lovely Ridgeback.